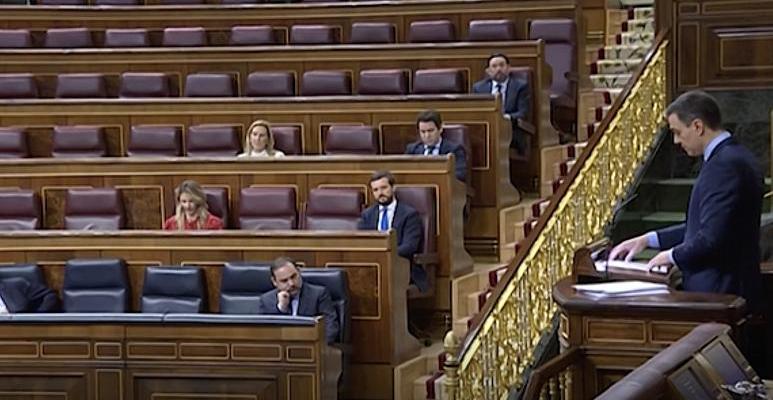 As of March 20, more than 1,000 people have died from Covid-19 in the Spanish State, placing it fourth behind only China, Italy, and Iran in both casualties and infections globally. Nearly one-third of the infections are located in Madrid and there is no end in sight, despite Prime Minister Pedro Sánchez of the ruling Socialist Party ordering a national lockdown earlier this week. Here, Laia Facet, an organizer with the revolutionary socialist Anticapitalistas responds to questions from No Borders News and explains how the left, trade unions, and social movements, including the Spanish State’s powerful feminist movements.

No Borders News: Describe the state of the pandemic in your country or city. How many people are infected? How many have died? What do experts expect in the coming weeks in terms of how fast the contagion will spread.

Laia Facet: According to the Ministry of Health, as of March 17, there were more than 13,000 cases and 598 deaths, but by that figure topped 1,000 by March 20. Many of containment measures have come too late so we will have to wait several days before we will know if they are working to lower the curve or not, which is the prime health objective now.

NBN: What practical measures has your national government taken to respond to the crisis? Have they acted responsibly or were they unprepared? Briefly describe measures your government is taking now to contain the virus and treat people infected with Covid-19. Is there a state of emergency, are schools closed, etc.?

LF: As I said, containment measures came late. At no point has the government foreseen how the virus could reach the levels of contagion, and spread as rapidly, it has done so. We have underestimated Covid-19.

This has created shortages in such critical supplies as masks and other medical supplies which are now scarce in medical centers and hospitals across the Spanish State. For example, tests to detect the virus are in short supply. Right now, there are many people with symptoms who haven’t been able to get tested.

On Friday, March 13, all colleges, institutes, and universities were closed. And over the weekend and the early days of this week, several public health measures were taken: closure of some commercial establishments (restaurants, bars, etc.); working from home where possible; mobility has been restricted for all people other essential work, caring for people who need support, or go shopping; and, the closure of borders and the prohibition of sporting and cultural events. However, by not ordering the closure of all companies, — except for frontline businesses like pharmacies and supermarkets, the government continues to put the population at risk when it is completely unnecessary.

LF: Spanish State has a fairly solid public health system compared to other countries in the European Union. However, there are significant deficiencies, as unions and social movements have pointed out for many years. These stem above all from budget cuts and austerity policies following the 2008 economic crisis, including lack of personnel and a shortage of beds, resources, research, etc., much of which has been privatized. Covid-19 has broken these weak links, leading to a collapse of public health resources and personnel.

There is also a parallel private healthcare system that monopolizes a significant percentage of resources, both in research, health infrastructure, and hospital beds. In the first days of the crisis, a very popular demand was to transfer all private health resources to public health. This demand arose in a context where patients who attempted to go to private clinics were turned away and referred to public clinics, a public system that has collapsed.

Currently, the Spanish government’s decree of a Covid-19 national emergency contemplates the possibility of making use of private resources by the public health system, but responsibility these measures was assigned to each Autonomous Community, thus guaranteeing very inconsistent implementation. Keep in mind that the Spanish Constitution grants varying degrees of autonomy to municipalities and provinces, as well as nations contained within the federal state such as Catalonia and the Basque Country.

NBN: Describe the official political response to Covid-19 in your country from the far-right and conservative parties, to liberal and social democrat parties, and the parties of the left if applicable.

How this health crisis is handled will have far-reaching political implications. A few days ago, the government’s first Decree was made public and contained some of the measures that I have already noted, but it also decreed the State of Emergency. This special measure allows the executive to take political initiatives without authorization from parliament for fifteen days. Prime Minister Pedro Sánchez’s decree gave extraordinary powers to the police, granted the army a role in domestic policing, and concentrated governmental authority in a few ministries, thereby violating autonomous governments and other institutions’ rights. These actions pose enormous risks to democracy, all the more so given the international authoritarian context. All this, along with closing of borders has, of course, been applauded by the mainstream conservative People’s Party as well as the far-right Vox party. At the moment, the right-wing opposition bloc is concentrating its criticism on the government’s negligence and delay in taking action.

At the same time, the government published a decree containing troublesome economic and labor measures. The decree suspends worker protection and allows temporary collective layoffs to be carried out more quickly. This is the measure that employers are using to dismiss thousands and thousands of workers from companies that have closed during the quarantine. The government has proposed a moratorium on mortgages, but there is no discussion of suspending rent payments. This comes in a context where hundreds of thousands of people are losing their jobs. The government’s solution is to cover part of people’s wages with public money, but they have not proposed any extraordinary tax on large companies.

The main unions have defended workers against the temporary collective layoffs, but workers’ assemblies cannot be held due to virus containment restrictions. Unions with weaker contracts or less influence with their employers are currently overwhelmed. Large-scale violations of labor rights are under way. For example, there are many companies that are forcing their workers to use the accumulated vacation days, which is illegal. And there are companies that are forcing their workers to continue reporting to work regardless of threats to their health. For example, this is very widespread in some industries and in manufacturing and has even caused spontaneous strikes in some factories, forcing them to close.

Elsewhere, domestic workers and supermarket workers find themselves facing dire conditions as they contend with a huge increase in their workloads in the midst of the crisis. These same workers suffer extremely precarious working conditions and salaries, not to mention health risks.

LF: We face many difficulties in the current state of general confinement. Activism and militancy are also secluded, so organizing is expressed for now mainly through social networks. However, there are two interesting initiatives. On the one hand, support networks have been set up for people who need help buying food or to taking care of their children. We don’t yet have a total count for experiences like this, but many neighborhoods are beginning to organize in this manner. On the other hand, within different social, union, and political sectors, a campaign has been organized going by the name “Social Shock Plan” that proposes measures in defense of the working and popular classes to prevent the health crisis from becoming a new social and economic crisis.

NBN: Any final comments about the impact of the Covid-19 crisis and how you think it will impact national politics in the coming weeks and months?

LF: Covid-19 is impacting societies around the world, and is having a very obvious economic and social impact, especially considering that all economists, right and left, in Europe have been warning of a recession even priorto the contagion. The fragility of the financial system is likely to precipitate a recession. In the case of the Spanish State, this is very clear. If the government continues its elevated public spending policies without taking any extraordinary measures to tax big business in order to raise money, then the public debt will rise and, just like in 2008, they will turn to austerity to cover it.