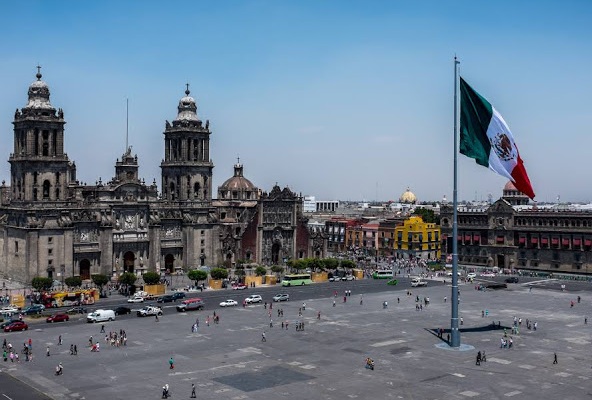 PRT Mexico: Our lives are worth more than your profits

As of May 3, Mexico has 22,088 confirmed coronavirus infections and 2,061 Covid-19 deaths. The real figures are likely significantly higher. If these numbers follow the pattern in Brazil, then Latin America’s first and second biggest economies will soon rank beside the U.S. and Western Europe as global pandemic hotspots. Meanwhile, Left-of-center populist President Andrés Manuel López Obrador has surprised his supporters by pivoting to the right. As the Guardian explained, AMLO as he is known, “has introduced austerity measures so severe that his critics have compared him to Margaret Thatcher and Ronald Reagan. This week, the president, popularly known as AMLO, unveiled more cuts in response to the Covid-19 crisis, including the abolition of 10 government departments, a hiring freeze and a 25% cut in government salaries. He also eliminated Christmas bonuses.”

The Revolutionary Workers Party (PRT) of Mexico issued this statement on May Day, explaining the public health, economic, and political landscape. Translated and published here as part of No Borders News ongoing international coronavirus coverage.

For the first time in almost a century, International Workers Day, a truly universal date, will be celebrated without massive demonstrations. This day, on which every year millions of workers around the world take to the streets, organize, fight, remember, and place demand on the system, comes in the midst of massive confinement measures imposed by the coronavirus pandemic.

A pandemic that has accelerated catastrophic trends within capitalist society, triggering and combining a multidimensional and civilizational crisis, where, among other elements, a new global recession, the health emergency itself, climatic and environmental catastrophe, the deepening of violence against women, and attempts to implement draconian and dystopian measures – justified by the supposed “war” against the virus – all converge.

As has been demonstrated in the past few weeks, the emergence of the virus cannot be considered a “natural” or exogenous calamity, that is, external to the suicidal logic of modern capitalism. Not only because the outbreak itself can be traced to the rampant expansion of capitalist accumulation, but also because of the path by which the virus spread, that is, from capitalist commercial and productive centers to the system’s peripheries.

Capitalist greed has also aggravated the world health crisis – both in terms of complicating political situation and intensifying suffering among the great majority – as that class resists closing non-essential economic activities or prematurely ending quarantines. This same greed is responsible for the long and profound deterioration of public and free public health systems, now privatized to generate profits from our very health and bodies.

[Read next, Andrés Lund: Capitalism stripped naked, Covid-19 in Mexico and beyond.]

It is not true that the virus affects the population uniformly and the figures bear this out. In Italy, the capitalist’s recklessness in not shutting down economic activities has already cost the lives of thousands of workers. In cities like Chicago, the African American population that represents 30 percent of the general population has suffered 72 percent of the deaths, while too many of our migrant worker sisters will end their days in anonymous graves.

Measures to halt non-essential activities in peripheral countries – where basic labor and human rights, such as formal hiring and the right to unionize and paid leave are largely absent and outrageous levels of employment in the informal sector prevail – are imposing a lethal choice on millions of people to either safeguard their health or risk going to work under even worse economic conditions.

Let there be no doubt, in this crisis, we are the ones putting our lives on the line. Workers, women, migrants, and the world’s poor are on the frontlines, doing the jobs that sustain life. We are the outcasts in the land who reaffirm our existence, our resistance, and our internationalist will to fight every May 1st. Less than two months ago, on March 8 International Working Women’s Day, we took to the streets around the world to demand our most basic rights and we walked of our jobs on Monday, March 9 to make visible precisely those essential jobs that society cannot do without today.

In the midst of the emergency, millions of healthcare and delivery workers, along with peasants and farm workers, are doing the vital jobs to maintain social reproduction and care as well as defend the fragile foundations of civilization, which, under capitalism, oppresses and exploits them. The fact that this system makes their work precarious and endangers their lives only shows the irrationality of the capitalist and patriarchal logic.

Similarly, this crisis has highlighted what the feminist movement and the International Women’s Strike put on the table long ago, that is, the centrality of reproductive, unpaid work in the home alongside paid caring work, including health, educational, emotional, nutritional, and house cleaning. In countries plagued by patriarchal and feminicidal violence, many women and girls face a higher risk of being killed during confinement in addition to the physical and psycho-emotional burden they bear – already disproportionate in times of “capitalist normality.”

[Read next, Karine Afonseca: Fight like a nurse, facing off with Bolsonaristas in Brasilia.]

And Mexico is no exception. The crisis is revealing the severity of the danger neoliberal policies represent for the population, which are not on display for all to see across the whole country. It also exposes the criminal and childish contempt that business leaders show towards the millions of workers whom they exploit and from whom they make their millionaire profits. This is easy to see in both their scandalous and outrageous refusals to shut down non-essential activities (maquiladoras, construction, the Salinas conglomerate’s operations) and the eagerness with which they line up for new bank bailouts at the expense of both the public purse and working-class lives. There is no room for doubt, there can be no room for conciliatory mediations when the writing on the wall is so clear: it’s their profits or our lives.

For these reasons and more, the Workers’ Revolutionary Party declares on this May Day that we should no give up an inch in defense of our lives. Social distancing must not stand in the way of honoring centuries of workers’ struggles. And we must not only remember the Chicago martyrs and the labor movement that conquered basic labor rights (limits on the workday, vacations, profit sharing, minimum wage , right to strike and to unionization, etc.), but we must fight for those same rights today. We cannot allow ourselves – workers, women, indigenous people, peasants, migrants, and youth – to be made to pay more than we are already paying for a pandemic and a crisis that the capitalist and patriarchal system itself caused.

We believe that the adoption of these urgent emergency measures is required to face today’s public health, economic, and social reproduction crisis:

1. Immediate nationalization of the entire health system for comprehensive care.

2. Unilateral suspension of the payment of all public debt (external and internal) to guarantee supplies in hospitals, as well as the debts of households and small producers, the immediate installation of a universal basic income (not only social programs) guaranteed for all persons residing in Mexican territory.

3. Moratorium on the payment of energy debts.

4. Nationalization of companies that fail to cease non-essential activities.

5. Taxes on the profits of large companies and the personal fortunes of elites.

7. Immediate reinstatement of all those dismissed in the midst of the quarantine.

9. The socialization of care work.

10. All essential tasks continue to be recognized in the same way after the emergency, that they be well-paid and enjoy all labor and human rights.

11. Prioritize the prevention, response, punishment, and eradication of all sexist violence.

Although we will be spending this May Day socially isolated or performing essential activities, and although the world’s streets will be silent, our internationalist, working-class memory and solidarity cannot be. Sooner or later the quarantines will be lifted, we will count the costs, we will mourn our dead, and we will meet again to embrace. And above all, we will all return to the streets to rattle the foundations of this society, as those who came before us did more than a century ago, to carry on the fight for our rights, our lives, and future of the world’s workers.

[For international coronavirus coverage and news and analysis from socialist and working-class movements, read No Borders News.]