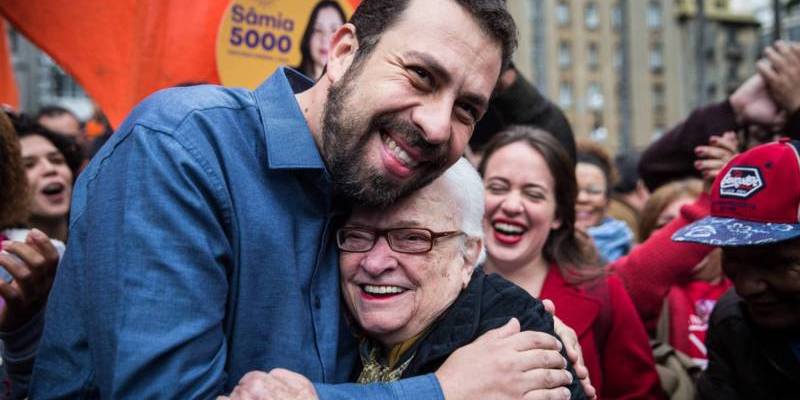 Valerio Arcary: Send the socialists into second round in São Paulo’s elections

On Sunday, November 15, millions of Brazilians will take to the polls in municipal elections across the country. Coming just days after Donald Trump’s defeat in the United States, all eyes will be on whether or not the voters deliver far-right President Jair Bolsonaro a rebuke in advance of the 2022 elections. Bolsonaro has laid Brazil bare to Covid-19, which has suffered some 164,281 deaths as of November 13, the world’s second highest number of deaths just behind the United States. Nonetheless, Bolsonaro has stabilized his government and will not leave without a push.

In São Paulo, Latin America’s largest city and Brazil’s economic heartland, Guilherme Boulos and Luiza Erundina are running on a joint ticket for mayor for the Party for Socialism and Freedom (PSOL) and  have pulled into second place in the polls, potentially sending them into a runoff on November 29 against incumbent mayor Bruno Covas of the centrist Brazilian Social Democratic Party (PSDB).

Valerio Arcary explains how their campaign is playing a strategic role in strengthening the Brazilian left and surveys the complex political terrain divided between Bolsonaro’s far-right supporters, the traditional conservatives, a bewildering array of centrist political machines, and the left, itself divided among the Workers Party, the Party for Socialism and Freedom, and a host of trade unions and social movements. He is the author of several books including O Martelo de História (History’s Hammer) and a leader in the Resistência current of the Party for Socialism and Freedom in Brazil. This article was originally published in Esquerda Online.

In Brazil, the electoral struggle is usually concentrated in the last fifteen days of the campaign, or even less. Breathtaking turns can happen. But this uncertainty creates the illusion that anythingcan happen. In reality, this is not the case. Political struggle is not like football. The electoral struggle has margins of uncertainty, but this margin is relatively narrow. The big trends are established before the campaigns start.

Since 2016, the ruling class has been on the offensive and, in this framework, in 2018 the extreme right reached the height of its influence. Throughout 2020, the Bolsonaro government suffered a slow, but continuous erosion of its support, especially in the largest metropolitan regions, more sharply in the southeast than in the south. In the strategic triangle of São Paulo, Rio de Janeiro, and Belo Horizonte, pro-Bolsonaro candidates may not even reach the second round of the upcoming elections.

The political forces that traditionally represented the bourgeoisie benefited most directly as Bolsonaro’s far-right trend declined relatively. These include the center-right block made up of the Brazilian Social Democratic Party (PSDB), the Brazilian Democratic Movement (MDB), and the Democrats and their satellites. It will not be a surprise that the PSDB’s Alexandre Kalil will likely win a first-round victory in Belo Horizonte, while Bruno Covas and the Democrats Eduardo Paes will make it into the second round in São Paulo and Rio de Janeiro respectively. This was predictable enough. The shift of Bolsonaro’s vote to the center-right corresponds to the ruling class’s own movement and the middle classes pulled in its wake.

But, although the Brazilian left is still on the defensive, due to an accumulation of social and political defeats inflicted on the working class and the oppressed, it has not been crushed. We have not suffered a historic defeat as we did in 1964. To be sure, we have endured a serious defeat, but the left has not been destroyed.

And within the left, the balance of forces between the Workers Party (PT), the Party for Socialism and Freedom (PSOL), and Communist Party of Brazil (PCdB) is changing. The PCdB’s Manuela D’Ávila is expected to get into the second round of the elections in Porto Alegre, along with PSOL’s Guilherme Boulos in São Paulo and Edmílson Rodrigues in Belém. At the same time, the PT is fighting for a place in the second round in Fortaleza, Recife and Vitória. This outcome has a history and important lessons. But did we learn anything from the 2018 election defeat when Bolsonaro won the presidency?

We didn’t lose to Bolsonaro because PSOL launched the Boulos campaign for president. Boulos and running mate Sonia Guajajara’s candidacy played an irreplaceable role in attracting a new generation of young people to PSOL who were brought into political life after the June 2013 mass protests and who no longer identified with the PT, unlike an older generation of activists.

PSOL understood the need to highlight the feminist and black movements, indigenous and LGBTQ people’s struggles, environmentalism and culture movements, and youth and human rights organizers. The party joined forces with this new generation, boosted the #elenão (Not Him) feminist campaign, and the PSOL presidential campaign went viral.

Neither did we lose in 2018 because the PT insisted on sticking with Lula as the candidate until the last moment, even though he was in prison. The PT’s decision, in fact, was legitimate and essential to guaranteeing the transfer of votes to PT presidential candidate Fernando Haddad from Lula’s supporter, thus guaranteeing his making it into the second round.

The political situation evolved so unfavorably between 2016 and 2018 that the most likely hypothesis was, especially after the random stabbing attack on Bolsonaro during a campaign event in Juiz de Fora, that he would win in the first round, creating an even more disadvantageous situation.

And we didn’t lose because centrist Democratic Labor Party (PDT) candidate Ciro Gomes didn’t make it to the second round instead of the PT’s Haddad. The counterfactual hypothesis that holds that Ciro Gomes could have defeated Bolsonaro in 2018 is a fantasy entertained by those who did not fully understand the defeats that have taken place since the impeachment of PT President Dilma Rousseff in 2016. But neither did we lose because Ciro Gomes abstained from campaigning for Fernando Haddad in the second round, although that decision was obtuse. Rather, it was the general reversal of the political situation that boosted Bolsonaro to victory.

[Read next, Valerio Arcary: Trump out, Bolsonaro next? Insights from the U.S. elections.]

But there is a huge audience on the left. The idea that the masses vote, essentially, for individual candidates, as if the political struggle were an electoral market, and the candidacies were products is naive. The decisive issue is not the candidate’s personal profiles, although that carries its own weight.

Instead, changes in social relations and the contest of strength between classes that shape the political situation is decisive in shaping electoral outcomes. But this variable requires an analysis at a higher and, therefore, more complex level of abstraction. When the popular masses have confidence in themselves and their struggles, they vote for the left. But when insecurity, fear, division, and confusion prevail, the way can be opened for the right.

The idea that the Brazilian Socialist Party’s (BSP) candidate for São Paulo mayor Márcio França is left wing, however stretches the meaning of the concept beyond all honesty. França was the PSDB Geraldo Alckmin’s right-hand man for ten years as the two ran the state of São Paulo regional government. Ten long years. The only possible argument is that França has maintained his membership in the PSB. However, it’s easy enough to rent the PSB label. The irrefutable proof is that Paulo Skaf, the head of the Chamber of Commerce (Fiesp), has used the PSB for his own purposes as Ciro Gomes himself has done.

The recent public disclosure of a meeting in September, that is, two months ago, between Lula and Ciro Gomes was interpreted by many on the left as a positive development because it signaled the possibility of greater unity in the fight against Bolsonaro. This is an illusion.

Ciro Gomes aims to fight with the left for the leadership of the opposition to Bolsonaro – that is, he wants to fight Bolsonaro from the center – because he is betting that the PSDB/MDB/DEM block will be worn down by 2022 because of the critical support they have lent Bolsonaro, just as former PSDB São Paulo governor Alckmin was damaged going into 2018 for his support of conservative President Michel Temer (who replaced Dilma Rousseff in 2016 after she was impeached). Ciro Gomes is playing the chameleon, he wants support from the left but does not want to burn bridges or upset the hard core of the São Paulo bourgeoisie.

The disclosure of the meeting with Lula was a maneuver by Ciro Gomes. He hopes to assuage the disgust that has accumulated on the left against him because he refused to participate in the campaign against Bolsonaro in 2018. He intends to win sympathy from the supporters of politicians with leftist leaning such as José Sarto’s in Fortaleza, Marta Rocha in Rio de Janeiro, and Márcio França in São Paulo. Ciro Gomes is promoting the idea that the candidates he supports must be lifted into the second round by these voters because only they (and not PSOL’s candidates) can defeat the center-right represented by Capitão Wagner, Eduardo Paes, and Bruno Covas. This argument is not to be trusted.

In fact, instead of fighting the right, getting Márcio França into the second round in São Paulo would create a partnership and smooth the way for a second term for Bruno Covas as mayor.

Only the Boulos and Erundina ticket can beat out the Republicans’ Celso Russomano for second place in the São Paulo elections, and only they will represent the left in a runoff against the incumbent Covas.

[For international news and analysis from working-class, oppressed peoples, and socialist points of view, read No Borders News.]