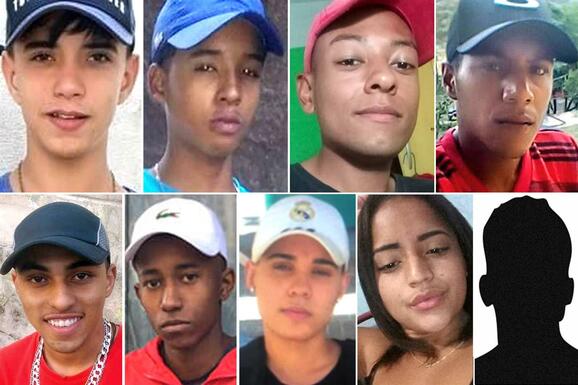 Silvia Ferraro is a history teacher in the São Paulo’s Municipal Network and is a member of the National Executive of the Party for Socialism and Freedom (PSOL), running as the party’s candidate for Senate in 2018.

Here she describes how her high schools students talked about the massacre of nine people in the D27 neighborhood of São Paulo. The DZ7 Ball, an annual funk dance party, brought together around 5,000 young people in the early hours of Sunday, December 1 in the Paraisópolis favela when Military Police launched an ambush that took the lives of nine people between the ages of 14 and 23. As an editorial in Esquerda Online put it, “One almost unbearable video records desperate young people stampeded by police and trapped in a narrow alley, packed together, being beaten by officers. A separate video shows the police, after brutally dispersing the party, torturing two completely defenseless young people in a dead-end street. In another, hundreds of young people retreat while MPs beat them with batons, shoot rubber bullet, and throw flashbang grenades. Critically, one video taken before the police raid shows thousands of mostly young Black people, almost all from one or another of Greater São Paulo’s poor neighborhoods, dancing and having fun…” The massacre has sparked a national outrage.

When I heard about the nine young people who died at the funk dance party in D27, I immediately thought of my students who often go to similar events in the city.

For those who don’t know, wherever there are young people, there is funk music, especially young people from the poor neighborhoods on the outskirts of the city who attend public schools.

There isn’t a single class I have without students listening to funk in their headphones. And as a teacher, it’s hard to convince them to put down the headphones and participate in history classes.

While trying to win them over to history, I started listening to their music, debating styles and lyrics, and I got to know about the dances they attend. I even found “politicized” funks that talk about feminism and Brazilian history to help in my class.

Today when I arrived at school, we talked about what had happened in Paraisópolis. One of my students was there. He said he heard that he someone yell “run,” and got out by jumping over a wall.

Another student, with tears in her eyes, said that a friend of hers had died, Dennis Guilherme.

What happened in Paraisópolis is reverberating far beyond São Paulo’s second largest favela because young people crisscross the city looking for dances. It could have happened to any of my students at any public school in Sao Paulo.

My students were very angry at what had happened and videos of the tragedy were already circulating in the zap social media groups they use.

I talked with them about how the cultural expressions of poor and black people have always been criminalized in Brazil. In fact, we had just finished studying Brazil’s Black Consciousness movement https://nacla.org/article/brazil%27s-black-conciousness-movementthat begin in the 1980s in which capoeira and samba were discriminated against and persecuted, so it was easy to relate to the “treatment” meted to the population that likes funk by the security forces, but also by society as a whole.

They talked about streets parties in rich and the middle-class neighborhoods, where drugs and sex are no more or less part of the scene than in funk parties, but where there is no repression. On the contrary, the city even closes off the streets and the Military Police protect the party.

I told them that the police can’t do what they did, it is illegal. It is a violation of the rights written into our Constitution. Sadly, my students do not have much faith in this history of rights because they belong to a generation whose rights were negated before they were born.

After we talked, I asked them to get to work: to write a slam about what happened. And despite being denied their rights, they are a generation that has not yet given up hope.

As long as there is hope, there is struggle!

Originally published in Esuerda Online. Translated and published with permission by No Borders News.