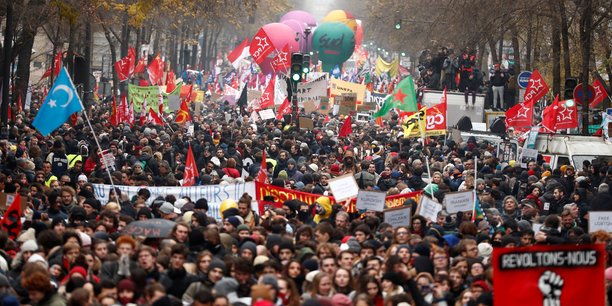 Between 800,000 (according to the police) and 1.5 million protesters (according to the CGT – France’s largest trade union federation), the first day of a strike against the government’s neoliberal pension “reform” was particularly impressive. In Paris and many regional cities, this was the largest street mobilization we have seen since the massive working-class movement during the winter of 1995, which bodes well for the future.  In many cities, police tried, but failed, to disrupt trade union marches: the demonstrators were determined to march, despite police provocations and violence.

Participation in the demonstrations reflects the first day of a strike against the president Manuel Macron policies, which was enormous in many sectors of public services as well as parts of the private sector. Between 60 and 90 percent of the French national railway (SNCF) struck, halting 90 percent of trains today, and the union has already announced a similar strike for tomorrow. Workers in the Paris public transit system (RATP) meeting in a general assembly also voted to renew their strike against tomorrow. Meanwhile, strikes across the nation’s public schools and universities have not been so widespread for many years. The Ministry of Education admitted that 40 of workers struck, while the unions estimated as many as 70 percent of elementary and secondary education workers, leaving many schools totally closed.

All of a sudden, this power shows why petty governmental maneuvers cannot contain workers’ anger. Does Macron hope to wiggle out of this by presenting his attack on pensions a little earlier than he had originally planned, by the middle of next week, as he announced today? Some political leaders, Macron’s “partners,” will undoubtedly be willing to play this little game, even while everyone knows there is nothing to negotiate: the strikers are demanding Macron retract this pension reform – no questions asked.

The next few days will be decisive for the organization of an open-ended strike and the growth of the movement for a general strike that not only forces the powers-that-be to withdraw their pension cuts, but also frees workers from Macron and his system.

News, Analysis, and Culture in Translation