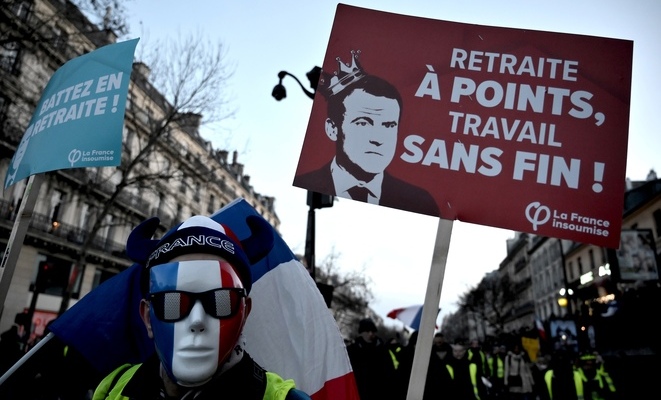 León Crémieux: The movement is holding on in France, but not spreading

Léon Crémieux is an activist in the Solidaires trade-union federation and member of the New Anti-Capitalist Party (NPA, France). He is a member of the Executive Bureau of the Fourth International. This article was originally published by Viento Sur and then translated and published by International Viewpoint. Reprinted here by No Borders News with permission.

Taken as a whole, the current movement against Macron’s planned pension reform is now on a par with the three main social movements of recent decades launched in response to pension reform: those of 1995, 2003 and 2010.

Macron and his government were hoping to wear down the strike movement of the SNCF and RATP [national railways and Paris region public transport] over the end of the year holidays. They also hoped that, with the help of the country’s mainstream media, they would succeed in discrediting the movement in public opinion, making not only the strikes but also rejection of the reform plan a minority opinion. Instead support is massive among the population, first and foremost the active employees who reject the plan by 75%.

But the tenacity of the strikers, the tenacity of the tens of thousands of activists who throughout the country are leading the combative trade unions and the interpros [cross-sectoral committees] have kept alive a political climate of social confrontation until today. In fact, the government itself appears to be the main culprit in this situation, because of its inflexibility, even though it recuperated a certain measure of support over the holidays.

The government’s stance was intended to make people think that the question was closed, the plan completed. In fact, the government announced after December 17 that the draft bill was written and that the legislative timetable had been set. To confirm this posture, no further discussions were scheduled between December 18 and January 6. The government was ostensibly declaring itself on leave and Macron made a series of trips abroad.

This voluntary silence was interrupted only by a presidential address of New Year’s greetings, describing an imaginary country, one enjoying economic and social successes, and bathed in serenity. This contemptuous stance only served to increase the animosity of the workers mobilised against the government, and that of transit-riding public struggling every day in the Paris region or on trains for end-of-year holiday trips.

Moreover, by stubbornly maintaining its insistence on raising the full retirement age to 64 (compared to 62 today), the government faced opposition from the entire trade union movement, including the moderate CFDT leadership and UNSA federation, potential allies of the government, who were absent from the cross-sectoral mobilisations, regardless of the positions taken by their SNCF and RATP union affiliates, which continued to take part in the all-out strike against the entire reform. So, paradoxically, it was the government and not the movement that was put on the defensive between the end of December and the beginning of January.

RATP and SNCF strikers and combative militants were able to impose a sustained pace of action, despite the procrastination of national inter-union organizations, leaving the movement with no other focus than a day of strikes and demonstrations on January 9. This made it possible to arrive on January 6 with the fighting spirit intact and with the government’s back to the wall.

Politically, Macron and the Prime Minister have caught themselves in a trap.

On the one hand, in recent weeks, they have constantly sought to defuse any extension of the struggle to other professional sectors which now benefit from specific agreements. First, of course, the military, to whom Macron has repeated that they are in no way affected by the “universal scheme.” Their status is nevertheless managed like all other civil servants by the Pension Code. Some civil servants have had some identical but less precise promises, such as police in the field and firefighters. The dancers and musicians of the Paris Opera have just clearly rejected a proposal to apply the reform only to artists recruited from 2022 onwards, proclaiming “We do not want to be the generation that will have sacrificed the following one.” Airline pilots were guaranteed to continue to benefit, as they do today, from a full pension at the age of 60 and to keep, along with the flight attendants, a specific supplementary fund.

The government has therefore had to cut up its universal scheme, multiply exceptions and create long transition periods for the application of its reform in many professions benefiting from early retirement.

While, in a demagogic way, the government has targeted for three months the “privileged of the special schemes,” (unions with strong pension agreements) it is conceding a few (or even many) exceptions to its “universal scheme identical for all,” while refusing to recognize the hardship suffered by millions of other employees who would not have the slightest transition phase in the application of this reform. These inconsistencies obviously weaken the government’s position. It even worries MEDEF [the employers’ federation], which fears that the financial consequences will weaken promised cuts in public spending.

But on the other hand, the strike movement is also subject to contradictions.

The day of strikes and demonstrations on January 9 was massive, with demonstrations comparable, although slightly smaller, to those on December 5 and 17. In addition to a major strike in the National Education sector, other sectors of the civil service were on strike (public finance, culture).

January 11 was a new day of demonstrations, voluntarily called on a Saturday to allow a broad mobilization beyond the striking sectors. A major mobilization of 500,000 demonstrators was called by the CGT, FO, Solidaires, CGC, FSU cross-sectoral joint committee. Yellow jackets (gilet jaunts) were everywhere calling for people to join the union marches.

On both Thursday, January 9 and Saturday, January 11, the police deliberately adopted an aggressive stance, similar to the policy practiced during the yellow jackets’ demonstrations, increasing the violence and targeting a number of trade union activists, particularly in Nantes, Rouen and Paris.

But apart from maintaining mobilization at a very high level during the national strike days, and apart from strikes in the refineries, energy, ports and docks sectors, and an appeal to the Bank of France, many important sectors have still not joined the strike beyond the days called by the intersyndicale.

Today, the strike movement in the SNCF has broken the record for the longest strike in the history of the SNCF. SNCF and RATP strikers are still bearing the main responsibility for the confrontation. The FSU, the leading teachers’ union, is not calling for an all-out strike for the time being, and FO is limiting itself to calling for national days of action, while supporting strikes where they take place.

Taking advantage of this respite, with unlimited help from the major media, the government has just made another attempt to break out of its isolation.

The question of the pivotal (retirement) age has been falsely presented as the only one to be settled, while the strikers and demonstrators, the intersyndicale [cross-sectoral joint committee] which brings together a clear majority of the trade union movement, and the opinion polls, are demanding a total withdrawal from the project.

So the media and the government staged a show that reduced the conflict in the first act to the sole question of the pivotal age and claimed that the only serious debate that to be held was with the CFDT.

In a second act, the CFDT proposed holding a major conference on the financing of pensions, as a proposal aimed at reinvigorating the “social dialogue.”

In a third act, the Prime Minister pretended on Friday, January 10 to meet the trade union leaders to reopen the debate, while sending his already finished bill to the Council of State for its validation and presentation to Parliament on January 22.

In a fourth act, in a letter sent on Saturday, January 11 to the trade union leaders, the Prime Minister has just proposed to “temporarily withdraw” for two months, the pivotal age at 64 years of age from his bill, allowing for the holding of a conference on financing to be held from February to April before the final legislative decisions. The cynical proposal made to the unions was to find within this period of time an alternative proposal that could find equivalent to raising the starting age to 64 (in the order of billions per year). But obviously this proposal would have to have the agreement of the employers and avoid any proposal increasing their contributions. If all these conditions were met, the pivotal age would be removed from the law. Clearly, in any case the alternative proposal would consist in making employees pay in another way (by increasing the number of years worked necessary to retire, for example). And in the absence of agreement by the “social partners,” it would obviously be “the government that would take its responsibilities.”

On Saturday, therefore, the pro-state media hailed the government and Macron himself for this “exit from the crisis” and both the CFDT and the UNSA welcomed this major step forward.

This is a new attempt to stifle the movement, and posturing by Macron, maintaining the assertion he will reduce the amount allocated to pensions while pretending to be ready for a compromise.

This masquerade has been rejected by the national intersyndicale, which is calling for two more days of strikes and demonstrations on January 14 and 16.

But the leading role will remain in the coming days with the strikers of the SNCF and RATP, the tens of thousands of activists who for the past month have alone played the role of political vanguard of this movement, trying to maintain and extend as much as possible the renewable strikes and mobilisations.

This core workers in the movement play a directly political role, while the national intersyndicale supports the movement without clearly calling for the generalization everywhere of the all-out strike. However, the coming days are bound to be a turning point in the movement. Now the fight to see if it is possible to extend it to other sectors is being played out, to plan a common mobilization of all the popular classes against this project by demanding its pure and simple withdrawal and by advancing demands for social justice in a system of distribution. It is indeed a perspective of a society of solidarity opposed to the neo-liberal capitalism of Macron that must be what binds this movement together.

If this extension does not take place, Macron be able to loosen the noose around his neck, whereas the social balance of forces could make him back down.