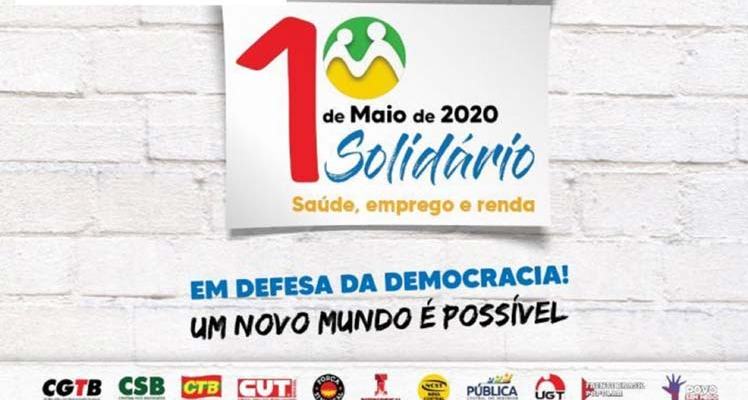 Esquerda Online: Brazilian workers must unite against Bolsonaro on May Day

As of May 1, Brazil is reporting 87,187 coronavirus infections and 6,006 Covid-19 deaths. Researchers believe these numbers are vastly undercounting the real number of deaths. And Brazil is suffering one of the fastest virus growth rates in the world, putting it on course to leap into the pandemic’s front ranks in the coming weeks.

Meanwhile, Covid-19 denialist President Jair Bolsonaro has pushed the country into the world’s sharpest political crisis with threats of a coup in response to growing calls for impeachment. This statement from Esquerda Online explains efforts to unite Brazil’s powerful left-wing political parties, trade unions, and social movements against Bolsonaro, but also against the mainstream neoliberal parties who may now be turning against him in order to salvage the system’s legitimacy. Translated and published by No Borders News as part of our ongoing international coronavirus coverage.

[Join a videoconference hosted by No Borders News with Valerio Ararcy and Paula Nunes on May 12, a fundraiser for Esquerda Online.]

May 1, 2020, international workers day, comes at a time when we are fighting, literally, for our lives. The new coronavirus has already infected more than 3 million people worldwide and has claimed more than 200,000 lives. In the United States alone, there are more than 1 million confirmed cases and more than 60,000 dead. In Brazil, we have reached the grim milestone of more than 6,000 deaths and more than 80,000 confirmed cases. Health systems are already collapsing in several cities, giving rise to dramatic scenes.

The virus is not democratic. The poorest workers, Afro Brazilians, and women suffer most of all.

Data released by the city of São Paulo leaves no doubt about how reality plays out across the whole country: the virus infects the rich, but those who die most often are poor and black people living in the working-class outskirts and slums. In São Paulo, the city with the highest Covid-19 numbers in the country, the risk of dying from the disease is up to 10 times higher in neighborhoods with worse social conditions. Despite Morumbi, an upscale neighborhood in the southern part of São Paulo, concentrating the largest number of cases, it is Brasilândia, a neighborhood on the city’s periphery, which has suffered the greatest number of deaths. The figures also show that blacks are 62% more likely to die from Covid-19 in the city than whites.

Read next, Franck Gaudichaud and Alex G: Between the October revolt and Covid-19 in Chile.]

In the peripheries, contamination is facilitated by precarious conditions while maintaining social isolation is hampered by, among other reasons, unemployment, informal work, and self-employment. When they are infected, the poorest people’s only alternative is the Unified Public Health System (SUS), which has a smaller number of ICU beds than the private system and is already overburdened.

The reality for women, which was already onerous, took a turn for the worse with the pandemic. In the state of São Paulo, Military Police responding to calls from women who are victims of domestic violence increased by 44.9 percent in March 2020 compared to March 2019. In Rio Grande do Norte, reports of rape, statutory rape, and sexual assaults committed against vulnerable persons doubled in relation to March 2019. In Mato Grosso, cases of femicide quintupled. When we consider that underreporting of these crimes was already a reality, and that underreporting will be accentuated due to quarantine and social distancing, the data is even more alarming.

At the end of April, women from different countries launched the “Cross-Border Feminist Manifesto,” declaring that if we “unite we can not only emerge from the pandemic, but we can change everything.” In addition to the increase in violence, the Manifesto points out that “The crisis is attacking the different material conditions of reproduction, intensifying and making more precarious women’s and LGBTQI* people’s productive and reproductive labor… On the one hand, the patriarchal system assigns the care of the most vulnerable, the elders, and the children, to women, increasing the burden of domestic work. On the other hand, many women – nurses, doctors, janitors, cashiers, workers, pharmacists – have to be at the frontline in this emergency, working in hazardous conditions for their health, for long hours, and often for miserable wages. Domestic and care work, as well as many precarious or informal jobs, are often carried out by migrant, Afro-descendant, Black, or indigenous women.”

[Read next, Statement of Feminists and Women’s Rights Organizations from the Global South and marginalized communities in the Global North.]

The virus is not the only threat to workers’ lives

Hunger, unemployment, the loss of civil and social rights, reduced wages, and domestic violence are real dangers, they are deadly enemies for workers. In Brazil, about 40 million people work in the informal sector. During the pandemic, with their income often reduced to zero and with no guaranteed employment rights, these workers are suffering the most alongside the unemployed, who totaled approximately 12 million beforethe pandemic, a number that, unfortunately, is expected to grow exponentially.

The government’s emergency aid of 600 Reals (a little more than $100 U.S.) is greater than the 200 Reals initially proposed by Bolsonaro. This amount is very important and will make a difference in the lives of many families, but it is woefully insufficient and, unfortunately, is combined with a series of provisional measures that permit wage cuts and layoffs. These measures even allow for negotiations between individual employers and employees, cutting out unions from the collective bargaining process.

The tasks of the workers on May Day

At the very moment the pandemic is advancing and an unprecedented economic and social crisis is threatening workers’ rights, Bolsonaro has revealed himself to be the virus’ principal ally. The president promotes his denialist views, works to sabotage social distancing, and disregards the suffering of thousands who are losing family members. On top of all this, he has launched an offensive against democratic rights, threatening a coup. Today, more than ever, to save people’s lives, to protect our jobs, and safeguard our democratic rights, we must remove Bolsonaro from office.

We cannot, at this time, take to the streets. But we can organize our forces to increase pressure to demand Fora Bolsonaro e Mourão!(Bolsonaro and Mourão out!)* We must call for early elections, that are free and direct. In this fight, we cannot be tied down by figures like Rodrigo Maia(the conservative President of the Chamber of Deputies) who, despite having all the evidence he needs, refuses to file an impeachment petition in Congress against Bolsonaro.

Of course, we will support unity with bourgeois sectors to fight for democratic rights against Bolsonaro’s coup offensive. However, in the fight for workers’ rights, we must rely only on our own strength. The call for a united May 1 by Brazil’s main Trade Union Centers was a positive initiative. But invitations extended to representatives of the bourgeoisie were a serious mistake, and this mistake cost us dearly as it led to a split with some working-class sectors who had joined in the May 1 call, such as the Frente Povo Sem Medo (Fearless Peoples Front), the Fórum Sindical, Popular e de Juventudes de Luta por Direitos e Liberdades Democráticas (the Union, Peoples, and Youth Forum in Defense of Civil Rights and Liberties), CSP Conlutas (independent union federation, United Struggle) and Intersindical ASS (the Socialist Cross-Union Alternative). Therefore, inviting Maia caused a division between representatives of the working class.

Likewise, the governor of the state of São Paulo, João Dória– who is positioning himself against Bolsonaro with an eye towards running for president in 2022 – but who, in the midst of the pandemic, refuses to renew the subway workers’ union contract, is not an ally of the workers. And Wilson Witzel, the governor of Rio de Janeiro, with his policy of exterminating blacks and slum dwellers and who, in the midst of the pandemic, submitted a bill allowing for the privatization of public assets, such as public universities and water, is not our ally. Nor is Maia, who led the Pension Reformand the votes on provisional measures to cut our wages during the pandemic. A limited defense of a few democratic freedoms against Bolsonaro’s offensive is the only sort of unity we can have with these gentlemen.

For this reason, the union centrals’ leaders made a serious mistake in deciding to invite them to the working class’ May Day event. International Workers Day, our historic and symbolic date of struggle, must be an expression of the workers’ united front to fight in defense of our rights,  and our fight against Bolsonaro.

Who is welcome in the working-class united front?

Representatives of sectors of the bourgeoisie are welcome in broader formations to defend democratic freedoms or any other specific demands that we may have in common with them. But their presence disrupts working-class unity around our own class program, because our interests are antagonistic to theirs. When it comes to the unity of our class, all representatives are needed and may take their place, be they union centrals, political parties, or social movements.

Those who invite figures like Doria, Witzel and Maia to the working class’ May 1 are wrong to do so. On the other hand, those who want to build a united front that excludes former president Luis Inácio Lula de Silva and the Workers Party (PT) are also mistaken. This is not a united front. You don’t challenge leaders you disagree with by ignoring them. Differences regarding Lula and the PT’s class-collaborationist program can and should be discussed within our class’s united front, but these disagreements should not prevent the united front from conforming in the first place. Why? Because the united front is necessary for the working class to fight for our rights and to defend our lives, and there can be no real unity of the class if it does not include its main leaders and formations. At the same time, it is clear that the working class’ principal leaders are wrong when they refuse to prioritize the formation of a united front as their main task. The PT, Unified Workers’ Central (CUT), and Lula himself must place their forces at the service of this strategic task.

The united front is necessary so that we do not remain tied to bourgeois leaders like Maia, so that we do not leave the working class at the mercy mainstream media outlets like Rede Globo, so that we can present our class program and fight for it, so that we are able to take the lead in the fight against Bolsonaro. The struggle to advance toward this goal is the fundamental and most strategic task at hand.

In the service of this strategy, on this May 1, we send our greetings and will stand beside, even if for now only virtually, all those who fight against Bolsonaro every day, but also those who struggle against Dória, Witzel and Maia. May we move forward in 2020 towards building our united front so that in 2021 we can celebrate a May Day that unifies the working class in defense of our own program.

Long live the workers May 1!

Save lives, defend our rights and jobs, strengthen the Unified Health System, tax the rich!

Bolsonaro and Mourão out! For early, direct, and free elections!

No to a coup! Dictatorship Never Again!

[For international coronavirus coverage and working-class and socialist movement news and analysis in translation, read No Borders News.]