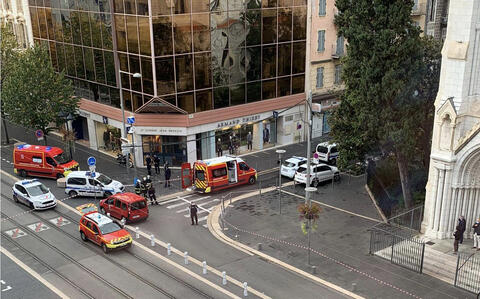 NPA Statement: After the horror in Nice, reject the logic of war

Less than two weeks after the beheading of a teacher in France, another horrific attack has left three dead in a church in Nice by a man reportedly of Tunisian descent. In response, President Emmanuel Macron claimed that France “is under attack” and, according to The Guardian, ordered the military mobilized “to protect all places of worship, particularly Catholic churches, for the religious holiday of All Saints Day on Sunday. The number of soldiers on the streets is to be raised from 3,000 to 7,000 and troops will be deployed outside schools for the return to class on Monday.”

In response to the murders, the New Anticapitalist Party (NPA), issued the following statement.

The NPA condemns the assassinations that took place in Nice and expresses its solidarity with the victims and their families and loved ones. In view of the information available, it seems that these assassinations were committed in the name of ruinous and deadly jihadist ideas.

This tragic event shows the total ineffectiveness of the government’s policies and repressive measures, from the Vigipirate plan (an acronym for France’s national security system) to the continued restrictions on freedoms. On the contrary, the Islamophobic speeches of powerful political figures and incessant provocations are part of a warlike logic which can only reinforce already existing fractures, they feed fanatics of all stripes and propel us towards new catastrophes.

[Read next, NPA Statement: After the tragedy of Conflans-Sainte-Honorine: anger, solidarity, and rejecting Islamophobia in France.]

According to the powers that be, this is an internal war, but it has the same logic as all classical wars: the government calls for us to join forces behind it, to accept its anti-social, warlike, xenophobic, and Islamophobic policy, it relies on emotions raised by these attacks. Far-right politician Marine Le Pen is pushing this logic to the maximum by asking for wartime measures and, undoubtedly, new restrictions on freedoms.

In contrast to these policies, we demand, as soon as possible, guarantees for the fullest equality for all people within the country, the end of stigmatization and discrimination against immigrants, the rejection of Islamophobic speeches and actions, and support for measures to strengthen social justice and equality.

We reaffirm our struggle against the reactionary and deadly ideas which are arming the killers and feeding divisions. We call on all progressive organizations to refuse to join in the rhetoric and reality of repression, and to instead promote expressions and examples of solidarity between the different sectors of the population, whatever they may live, their national origin, of their religious beliefs. We are thinking here in particular of the marches and other initiatives against racism and for equality, which are the best guarantees to defend an egalitarian and united society in the face of all those forces promoting civil war.

[For international news and analysis from working-class, oppressed peoples, and socialist points of view, read No Borders News.]